Home NEWS! Book Reviews Why wouldn’t I want to?

Why wouldn’t I want to?

Why wouldn’t I want to repeat what someone I don’t even know said about my novel?
Jo-Ellen Sharpe

5.0 out of 5 stars Not your usual Christian cozy 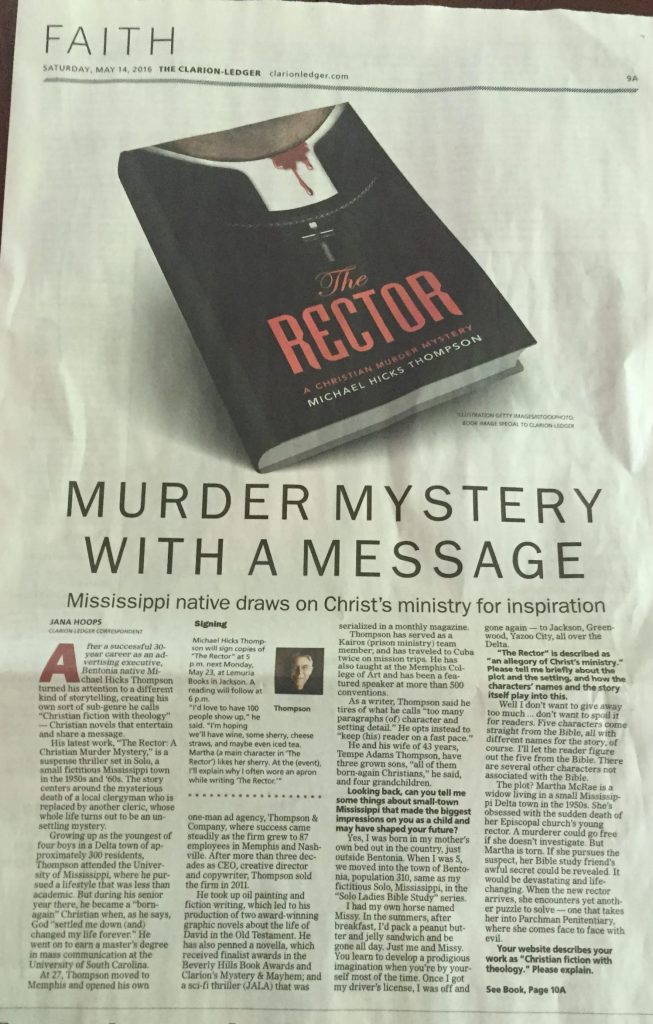 Verified Purchase
Having a voracious appetite for fiction, I have read many murder mysteries from hard boiled to paranormal to innocuously cozy when the evil that men do gets to be too much. As a Christian, however, I have had difficulty finding really good writers who share my world view. Fiction writers who understand that true evil cannot be defeated by mere human good are rare; those who can elevate the conflict to its spiritual level and do it well are rarer still. Michael Hicks Thompson is definitely getting there. The Rector brings the cosmic battle between God and evil to the Delta of Mississippi, where ordinary, unimportant human beings are involuntary soldiers on one side or the other. This is not a book about the paranormal, however. It reads more like Southern Gothic or even Eudora Welty. Unlike Welty’s books, which frequently use single events to throw many characters together, The Rector takes its characters through several connected events over a span of several years. While I have read complaints about this technique, I found its use emphasized the long term nature of the basic conflict. My only issues have to do with the book’s setting in a somewhat altered Delta. Of course, most non-Delta residents wouldn’t notice these changes, but there are a few historical discrepancies. (Women weren’t allowed on juries in Mississippi until 1968. Just pointing that out.) Taken as a whole, though, I recommend The Rector to any lover of Southern mysteries but especially to any reader of Christian mysteries who wants to see faith that goes deeper than the church rummage sale.