Home On Writing Plotter, or Pantser? Which Are You?

Plotter, or Pantser? Which Are You?

I’ll begin with a confession. I’m a plotter, sometimes called an outliner. I’m not a pantser. A pantser is a writer who sits down at the computer and writes a book or novel with a premise and little else. Stephen King professes to be a certified pantser.

“I distrust plot[ing] for two reasons,” he wrote in his famous book, On Writing. “First, because our lives are largely plotless, even when you add in all our reasonable precautions and careful planning; and second, because I believe plotting and the spontaneity of real creation aren’t compatible…my basic belief about the making of stories is that they pretty much make themselves. The job of the writer is to give them a place to grow.”

Me? I’m an outliner, a plotter. This doesn’t mean I’m not flexible. The outline inevitably changes as I write. So, why have an outline? I suppose the outline gives me confidence that I have a story worth telling, with a beginning, a middle that doesn’t sag, and a potential ending.

Interestingly, our minds are conditioned to the 3-Act storytelling structure. In Act I (25% of the entire novel) your story usually opens with a bit of backstory, or maybe an inciting incident, then back to life as it was before the incident. Either way, by the end of Act I, the protagonist has been revealed, and most likely the antagonist.

I also like to include a contagonist, which allows me to place obstacles in front of the protagonist without overusing the antagonist to do this. I show how to do this in my writing workshops.

After the first inciting incident, the protagonist must make a decision whether or not to get involved. If you pay attention, you’ll see this pattern in many novels, even movies.

Then the story morphs into Act II (50% of your novel), with all its key storytelling elements, like, obstacle after obstacle that the protagonist faces, and a Big Twist at the midpoint, followed by a disaster or an ‘All Is Lost’ moment—the crisis that seems impossible to overcome. The protagonist must make a second, often life-determining decision whether or not to continue the pursuit.

The climax usually kicks off beginning in Act III (the last 25%), followed by another obstacle, then some  descending action, and finally the wrap-up, resolution, or denouement, as the French call it.

Our brains are conditioned to this method of storytelling. 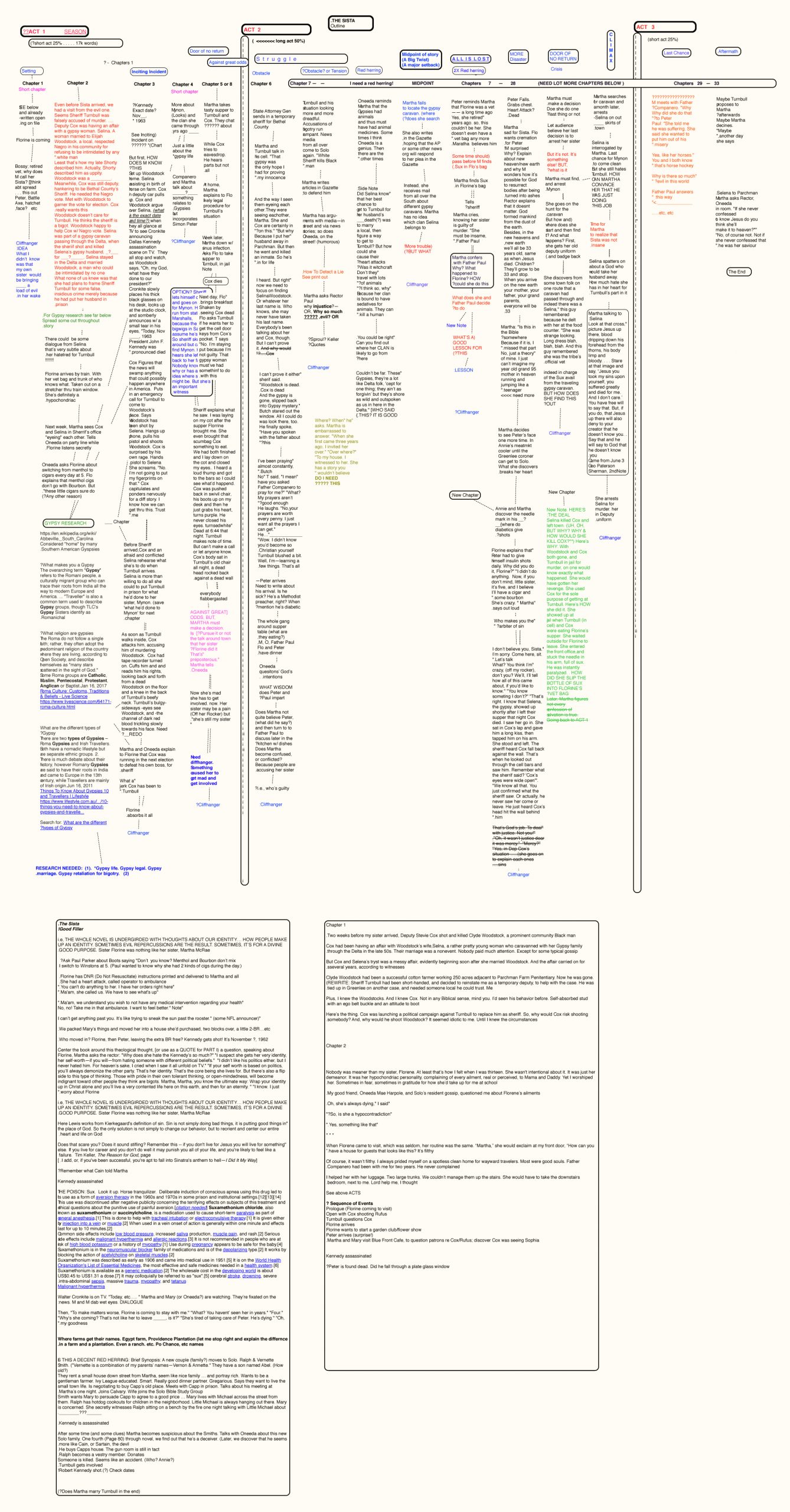 The 3-Act format has been around for about 2000 years. Most plays and novels have been written based on that methodology. Before that, Shakespeare was mastering in Dramatic Irony, a subject I also teach.

There are more 3-Act diagrams on the internet than you can count. Check it out, just search for 3-Act Diagram. but you won’t find my favorite unless you can see the plot points I’ve constructed in the digital illustration below. Or in one of my classes.

But, the next logical question is: How do I use the diagram to stay on target with my story? Or, deviate when necessary.

Before writing my first murder mystery, I bought a 4’ x 8’ sheet of plexiglass from the hardware store.  I hung it on the wall so I could see it from my writing table. I glued all the key plot and element points on the glass where they should occur in the novel. I then used Post-It Notesâ to scribble out what I thought would be the various scenes.

It was fairly flexible. I could use colors to distinguish the characters involved, and I could make sure I didn’t have a sagging middle (which is the downfall for most authors). If I didn’t have action occurring in Act II, I’d create some and stick it up there. Just simple notes, sometimes loaded with dialogue if it came to me.

This is the concept stage, full of sticky notes, all very susceptible to change during the writing stage. I wasn’t about to fool myself into thinking that this thread of a story was set in stone. I knew it would change as I went along.

I’d be at my computer, the plexiglass ten feet away, full of sticky notes, annoyed with the effort to jump up, hustle to the board to move notes around or make new ones, then back in the chair. I became tired of jumping up and down. But I did it and finished the first draft of that murder mystery in three months. Halleluiah!

Before I started concepting the second novel in the series, I searched for computer software programs that might help me accomplish the same process. I wanted to make changes to the outline on my MAC screen, not on a plexiglass board full of multi-covered notes ten feet away. 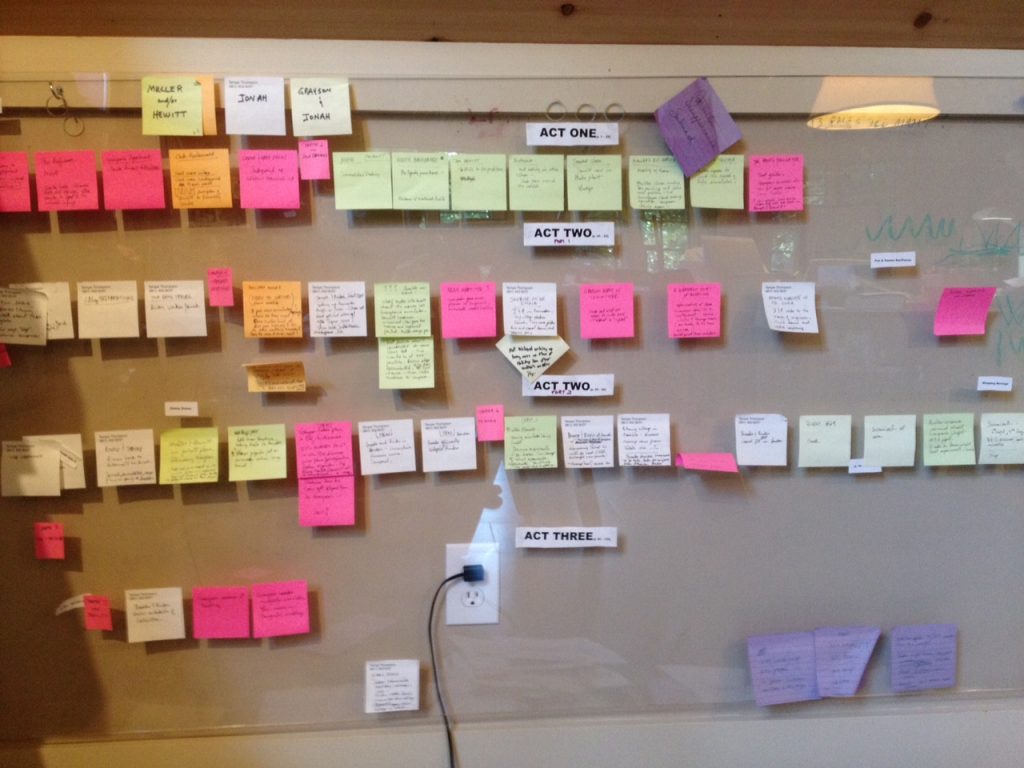 Soon, I learned I should be looking for a mind-mapping program, where I’d have the ability to move things (notes, words, etc) around on a computer screen instead of a 4’ x 8’ piece of plexiglass.

It took me one search to realize all those mind-mapping programs were way over my head. Believe me, I tried a couple of them. Too complicated for anyone but a teenager.

Then I stumbled on a mind-mapping program so easy even I could do it. Scapple. It’s not expensive. I recommend all outliners consider it. I have no financial or affiliate interest in it whatsoever. I’ve been recommending it to my writers group, and at writers conferences where I’ve given workshops.

If you live within say, 50 miles of Memphis, and can commute for a 2-day writing session here in my home, and willing to pay $300, I will feed you, teach you, and you’ll come away with enough excitement and energy, and hopefully the first 30 pages of your novel. Plus, you’ll make writer friends and possibly form your own critique group. This 2-day session is not merely for beginners. It’s for established writers as well. If interested, I will provide you with references–  others who’ve heard my sessions, the editor-in-chief and managing editor of a writing magazine, and other authors.

Just message me. And we’ll start a discussion from there. I’ll explain in more detail the itinerary, and the content of the sessions.