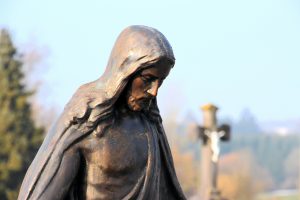 I didn’t want to cut this scene from my new novel, The Actress, but I couldn’t get it to fit without being contrived, forced into the story.

That next Sunday night, after supper, I did something I’d never done before. I knocked on Father Compañero’s door. I was curious about something.
“No, you’re not bothering me,” he said. “Come in Martha. Sit, tell me what’s on your mind.”
“There’s something I don’t understand.”
“Okay, let’s talk about it.”

“The other day I saw men enamored with Tully Ivey. I got to thinking about Jesus and his encounters with women. And, well …”
“Go on.”

“Well, if Jesus is equally God and equally man, and he never once committed a sin, how could he be fully man and avoid looking at a woman without the slightest bit of lust in his heart? All the men I know do it. How could he avoid it if he was also fully human?”

“That’s an excellent question. It’s a simple answer, really. When Jesus encountered people, he saw their souls, not their physical appearance. Do you realize that every encounter he had with someone, he already knew what was in their heart. Remember the Samaritan woman at Jacob’s well? He told her she’d been married five times, and was now living with a man, not married.

“He knew what was in people’s hearts. He looked into their soul. He even knew what was in Nicodemus’ heart that night in the garden. And there’s Andrew. When they first met, Jesus told Andrew that he saw him resting from the sun under a fig tree—miles from Jesus. Andrew was floored. No one had seen Andrew under the tree. Jesus simply looked into the souls of every person he met, not at their physical appearance. He knows we are a soul that happens to have a body—instead of a body that happens to have a soul. Our bodies will perish, but our souls will live forever. So, he was much more interested in our souls than our physical being.”

I shot back: “But he had to be interested in our physical being. He healed so many people from diseases and infirmaries.”

“Yes, he did. But he also said to many of them, ‘Go, your sins are forgiven.’ That’s a soul response. And remember, he healed the sick so people would realize he had a power no one else had. He used his miracles as proof of his God-being. But he also cared about their infirmaries. He has a compassionate heart.”

I thanked him for the explanation and slept well that night.